Success Secrets from a Cactus 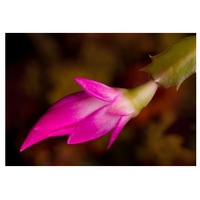 She reveals herself to me a little more each day. And I find myself eagerly anticipating her next growth spurt. To bear witness to this evolution is a miracle in itself. Especially because not long ago, she was withering away and I almost left her for dead. But something deep inside of me wanted her to live, and a part of me knew that I was negligent in my nurturing duties. I felt like she was dying because of me… because of what I hadn’t done to sustain her and because of my belief that her survival was out of my sphere of influence.

How wrong I was.

I had an immense amount of influence.

What was once a strong healthy Christmas cactus bursting with colour and filled with vigour had now withered down to her last two inches of life. I had been pruning her back with alarming regularity as each cactus leaf lost its vitality. What I was left with was a fraction of her fullest potential. I decided that her enormous pot no longer served her, so I replanted her few remaining leaves in a tiny pot that was more appropriate for her delicate structure.

Over the days, months, and years that passed there she sat in the corner of my apartment…fragile, barren, and almost forgotten. Until I made an agreement with myself that I would be more diligent in my care for her. I didn’t want her to die. She was a gift from someone dear to me, and she represented something greater than her slight frame alone. She represented life.

My motivation turned into commitment. I placed her directly under the rays of my lamp, on the side table in my living room. Each day when I sat on the couch next to her, I would ponder her existence. I gave her a lot of focused attention; I would water the earth in which she sat, and I would talk to her. Month after month, nothing happened. I never lost hope. I had a quiet confidence that she would rally, even though I had no evidence of any such thing.

It wasn’t until many months later that her leaves began to grow, one millimeter at a time. I watched in wonder at this miracle unfold before my very eyes. Millimeters became inches and inches became one foot. And finally just last week, she flowered again for the first time in years! One pink blossom was born.

Nature is a great metaphor for life and business, because it reveals what lies below the surface layer; the heart of the matter.

I’m curious if you’ve ever been in a situation in your business where you’ve been frustrated about your lack of progress or been close to giving up on something altogether.

Don’t underestimate the power of your influence.

You have the power to choose, each step of the way. You set the pace. And your actions matter. You can choose to show up however you want in order to influence the outcome.

For me, I had a quiet strength, a determined spirit, relentless perseverance and consistent focus with complete detachment to the outcome. I also trusted the fact that she would grow, even though it was years before she flowered.

What I learned is to:

So, how about you?

Remember, success is created. It doesn’t happen to you, you make it happen.

If you need some help with bridging the gap to your next level of success, I’m here to support you. Sometimes, when we’ve been doing the same thing in the same way for too long we get entrenched in one particular perspective and we can’t see the way out. I can’t change the direction of the wind, but I can help you adjust your sails, to always reach your destination. Contact me for a complimentary 45-minute consultation. I’ll help you see the bigger picture, so that you will know the next most powerful steps to take toward your business success.

I am Not an Expert. I am an Imposter.
How to Say No, Without Feeling Guilty